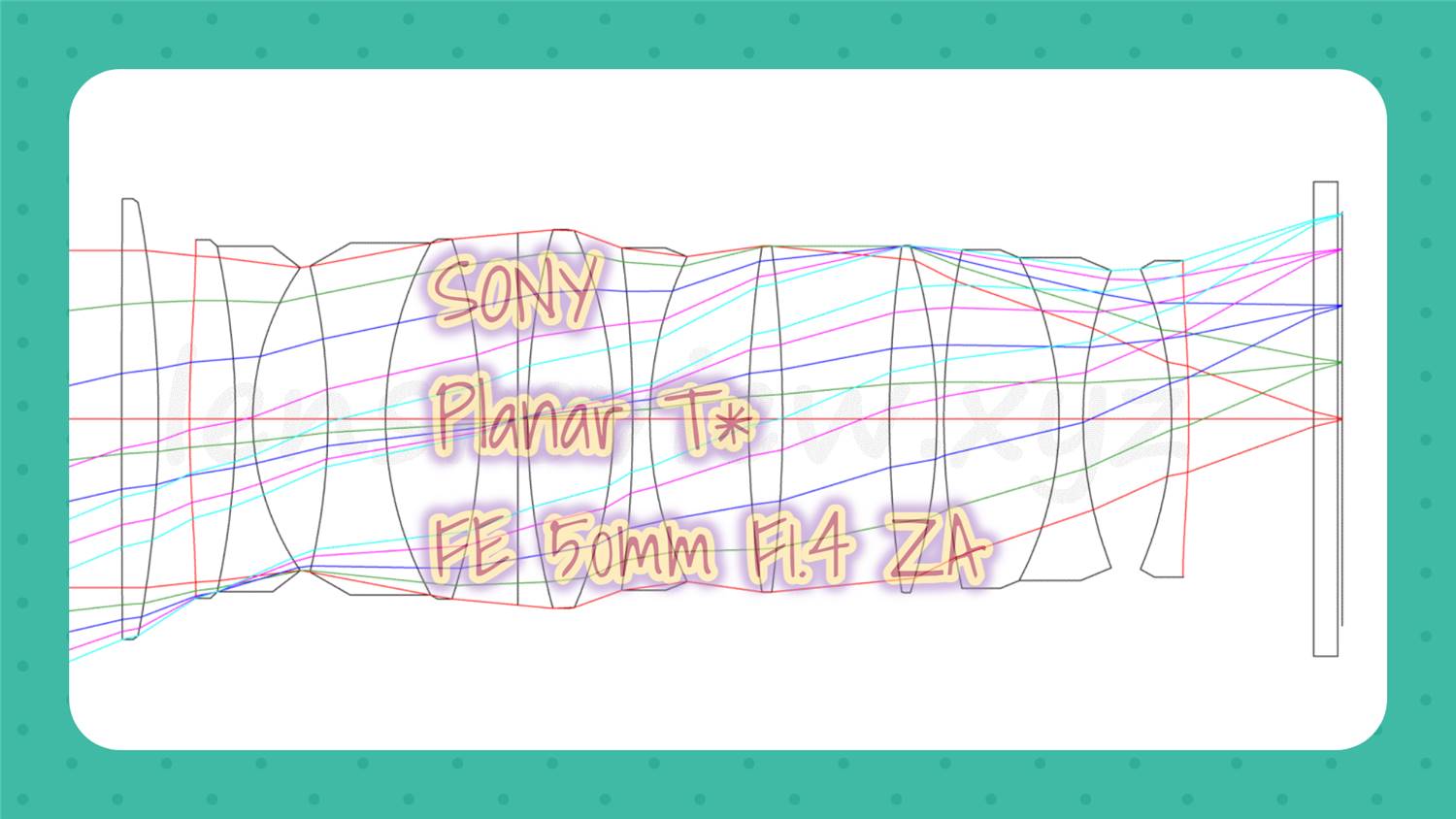 This is a performance analysis and review article on the Sony Planar 50 1.4 Zeiss.(SEL50F14Z)

Even if you look them up in magazines or on the Internet, you probably only find similar "word-of-mouth recommendation" articles like that.

Please enjoy the special information that you can only read on this blog.

The mount for Sony's full-size mirrorless cameras is the E-mount, but the lenses are named FE lenses.

FE lenses are stratified into four grades according to grade: ZEISS (Z), G Master (GM), G (G), and unnamed. (Abbreviations in parentheses are in the product name.)

Regarding these grades, "G/GM" is derived from the name used for the high-end series of α-mount lenses (Minolta), and G Maser/G/No Name seems to be defined as high-performance in that order.

On the other hand, "ZEISS" is a famous German lens manufacturer and was used in high-end SONY digital cameras.

It seems that there is no definition as to which lens is better, ZEISS or G Master.

SONY's camera and lens business division absorbed and integrated Minolta in 2006, resulting in this confusing hierarchy.

It would be easier to understand if we consider lenses that flow from Minolta as G series lenses and pure SONY products as ZEISS series lenses.

ZEISS is a long-established German optical manufacturer with a long history that seems to have existed since the birth of the camera.

SONY and ZEISS have long collaborated on lenses for compact cameras and camcorders, and ZEISS lenses have been used in their high-end products.

This is the first analysis of SONY lenses on this blog. For the first time, we chose the 50mm standard lens.

This lens was positioned as a symbol of the FE lens series for full-size mirrorless lenses, and I think it was intended to show the superiority of mirrorless lenses in terms of image quality. For this purpose, I think they used ZEISS, with whom they had a relationship in the field of condenser digital cameras.

It was quite heavy and long, but since I had already seen Sigma's Art50 1.4, I think my personal opinion at the time was that it did not have that much of an impact.

I know this is an unrelated topic, but I personally have a strong image of ZEISS as a CONTAX (camera), and at the time, it looked cooler than Leica and was a camera that I admired.

I wonder if you could revive it as a SONY rangefinder camera? I was young at the time and didn't know much about it being manufactured by Yashica…

Since this is a recent product, I was able to quickly find the patent documents. However, although the product name is ZEISS, the patent seems to have been filed by SONY.

I wonder why it is not filed by ZEISS… Hmmm…

I am sure that Sony's optical designers went to ZEISS in Germany for training, received instructions, designed the lens, and came back home…

There is no comment on Sony's website that the lens was designed, produced, or certified by ZWISS, so they must have been trained there!

I say this because any further mention of it would be easily erased, such as in a place like this, a weak blog.

The patent document with the supposed design values is WO2019/229849. Since there does not seem to be much difference between Examples 1 and 2, let's reproduce 1 as the design value.

Above is the optical path diagram of the SONY 50 F1.4 ZA.

Planar is supposed to be a 6-element Gaussian…but what? Gaussian?

It has 12 elements in 9 groups and 2 aspherical lenses. One special low-dispersion material ED lens is also thrown in to correct chromatic aberration.

Indeed, looking at only the six lenses on the subject side, it looks as if there is a Gaussian lens. Depending on how you look at it, you can see that it looks like a dinosaur-like evolution from the original Gaussian.

While staring at it, I noticed that it also looks like the front and back of the SIGMA Art 50 1.4, which has similar specifications, turned upside down.

The SIMGA Art 50 1.4 has a configuration with a Gaussian-like lens on the image sensor side.

Since a mirrorless camera structure has more space on the image sensor side due to the lack of a mirror, it tends to look like a conventional SLR lens turned upside down, and this phenomenon seems to be manifested by different manufacturers.

Spherical aberration has been corrected extremely well for a large aperture of Fno1.4 because it is a late and new product from 2016. This may be due to the fact that the mirrorless design allows for greater freedom in lens placement.

field curvature is extremely well corrected in line with spherical aberration. The name "Planar" was originally given to Gaussian lenses with improved field curvature, and it is true to its name.

The symmetry structure of the Gaussian has been changed so that the shape of the distortion is no longer a simple barrel shaped. However, it has been corrected to a very small absolute value.

Let's look at it as lateral aberration.

When I saw the performance of the SIGMA Art 50 F1.4, I thought there would never be another 50 F1.4 that could surpass it at a decent price, but now there is.

At the moment, it is about twice the price of the Art, so it is also a conundrum how to consider cost-effectiveness.

There is some c-line (red) on the axis, but the rest of the spots are small. From the viewpoint of chromatic aberration, it would be better to stop down about a half stop.

The MTF is extremely high from wide open. There is no need to stop down the aperture to improve the resolution performance.

From the center of the image (blue line) to around 18mm of image height on the periphery, the MTF improves further.

However, since the details of glass material data are not disclosed in general lens patents, there is a possibility that an external secret material is used and that chromatic aberration is actually small.

In either case, the performance is at an extremely high level, so the difference will not be noticeable in actual shooting.

The ZEISS name and price are not for nothing. However, it can be said to be a good value for this price and this performance.

Those who seek ultra-high performance will be fully satisfied if they purchase this lens.

On the other hand, Sigma's Art lens is also outstanding in terms of cost performance, and SONY users will have a very difficult and agonizing choice of a 50mm standard lens.

Looking at the examples of actual photographs, the sense of transparency that comes from the high resolution is addictive once you use it.