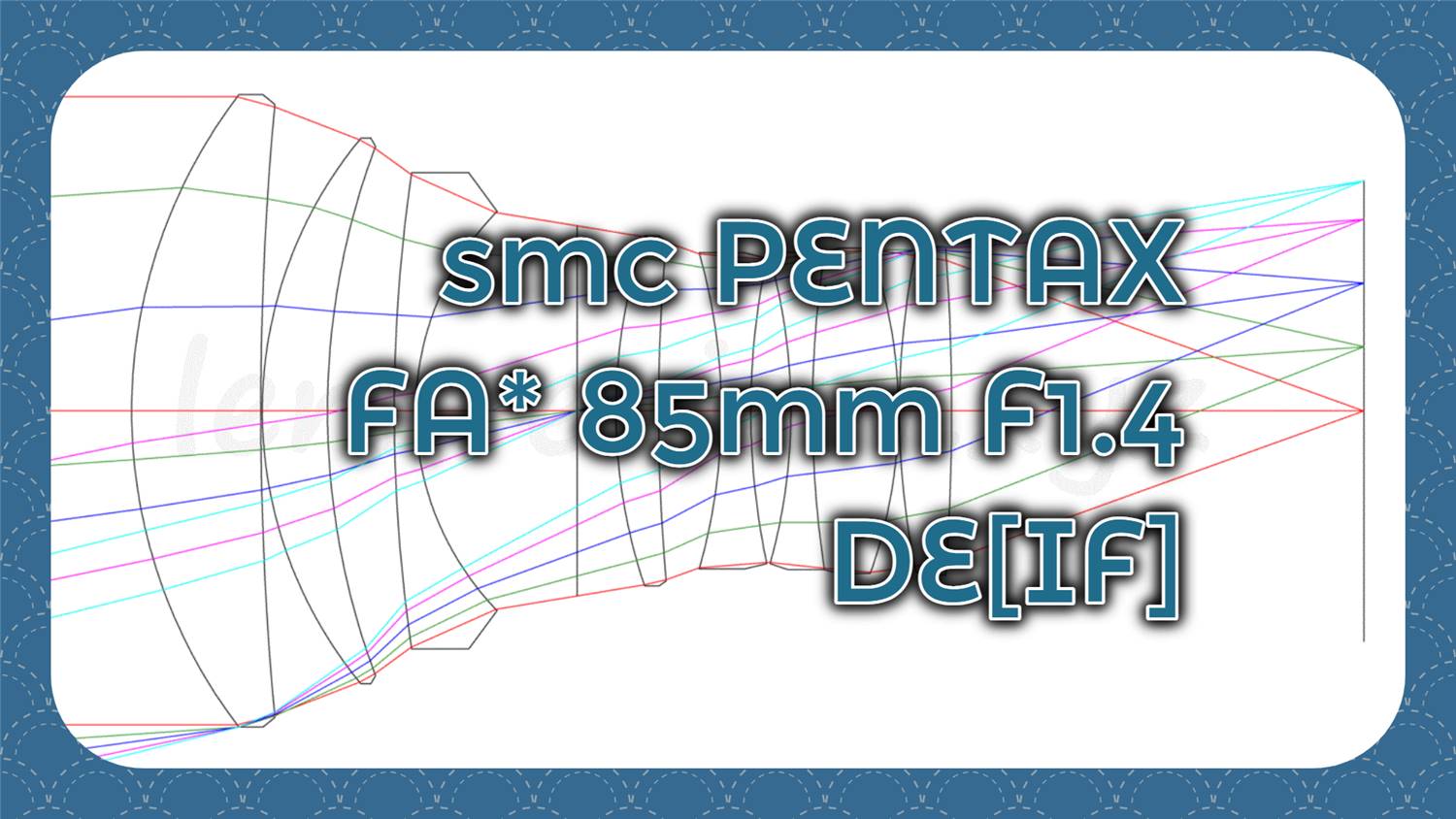 This is a performance analysis and review article of the smc Pentax FA 85mm F1.4.

The 85mm F1.4 specification lens, long absent from PENTAX, was finally renewed in 2020 and released as the HD PENTAX-D FA★85mmF1.4ED SDM AW.

The person who designed this lens is Mr. H (tentative name), who is also a famous designer who needs no explanation.

This previous generation 85mm lens was regarded as a revolutionary optical design for mid-telephoto lenses at the time of its release, and as we will discuss in detail in the performance analysis article, we have heard a legendary anecdote that NIKON saw this design at the time and hurriedly renewed its own 85mm lens.

*This is just a rumor.

After all, there are ordinary users who proudly say, "I buy this lens because it was designed by Mr. H." I know of no such lenses other than Mr. H's lenses. I don't know of any other lenses that are like that, except for Mr. H's lenses.

There are optical designers from other companies who frequently appear in magazine interviews, but it is rare, or rather, I have never seen a user who even professes to be a "fan" of such a person.

Mr. H is probably the most famous modern optical designer in Japan, although this is partly due to the fact that he was active at a time when the Internet was developing and individuals were able to communicate nationwide.

It is possible that no other optical designer will be more famous than him in the future.

Incidentally, the English version of Wikipedia has a page on Mr. H and a list of lenses he designed. Strangely enough, there seems to be no Japanese page…

I wish I could design a product that would be praised directly by the users, but I am finding it impossible to do so due to my age………..Gassho

In this blog, products designed before digital exclusive use (products for film) are categorized as old lenses, so this lens is the first old lens analysis in a long time.

Now, let's get back on track and move on to the research report. Since we know the inventor and product specifications, we were able to find the patent document in one stroke. It is Patent Publication No. 3-200909.

Above is the optical path diagram of the PENTAX FA 85 F1.4.

It has 8 elements in 7 groups and no aspherical lenses are used. The three lenses on the subject side consist of two positive lenses and two negative lenses, similar to a Gaussian type, arranged in sequence.

An aperture is placed in the middle, and the lenses on the image sensor side are arranged in a configuration similar to a Tessar with an additional convex lens.

Many of the products older than this one until before the 1980s had a configuration similar to a larger Gaussian or Ernostar, and many of them had an unbalanced configuration that made the lens on the subject side of the aperture look larger than it is.

This lens has a beautifully flowing arrangement of lenses with a sense of tension from the subject side, and there is no waste or gap.

The reason why the Tessar-like rear lens group on the image sensor side of the aperture was configured in this way is explained in the patent document.

Before this lens, it was common to focus by moving the entire lens, but this patent's purpose was to focus by moving only the rear lens group because the lens would be too heavy and the lens barrel would become too large if autofocusing (motorized) was attempted.

Naturally, it is not possible to focus the lens at any desired location, so this beautiful optical system was created as a result of optimizing the lens design there.

The 85mm lens is the ancestor of the modern single focal length lenses.

The fact that this optical configuration was discovered at the end of the 1980s may be the reason why it is called a revolutionary configuration.

The Gaussian type is a beautiful lens configuration with a symmetrical arrangement for standard lenses, and this previous generation 85mm lens has a very beautiful, simple, and complete configuration for a mid-telephoto lens optical system while accommodating autofocusing.

In the future, we plan to publish an article analyzing older 85mm lenses from various companies as a comparison.

This lens does not use an aspherical lens, but spherical aberration is small.

Axial chromatic aberration is slightly larger than that of modern lenses, but it is not noticeable and should not be an objectionable aberration since it is caused by a shift in the g-line (blue).

field curvature does not increase with specifications from telephoto, so this product does not appear to have any problems.

Distortion is also corrected to a surprisingly small degree, although the telephoto-oriented specifications are not large to begin with.

Not only is the lateral chromatic aberrations small, but also the slight remaining component is in ideal shape. f-line (light blue) is extremely small, so the resolution improves dramatically when the lens is stopped down.

The g line (blue) has little effect on resolution, so it is left out to some extent, but when it is left out, it is superimposed on the c line (red) to create a purple aberration that reduces the redness.

Let's look at it as lateral aberration.

Since no aspherical lens is used and the number of lens elements is smaller than that of modern products, coma aberration remains in the tangential direction. Also, flare in the sagittal direction is large. Both of these aberrations decrease as the lens is stopped down, so this is a lens where you can enjoy the changes as you stop down the lens.

Since the sagittal flare was large due to transverse aberration, I thought the spot on the peripheral image height would be a tight V-shape, but the effect was limited to near the maximum image height only.

Here is an enlarged view with the scale changed.

It can be seen that the resolution is clear from the center to the mid-range. Although the focal length is different, you can see how high the resolution is when compared to the NIKKOR 50mm f/1.4D, a lens with an Fno of 1.4 and no aspherical lens, which we have already analyzed in the past.

Although some field curvature remains, stopping down to f/4.0 will give near-ideal resolution performance. This is because the aperture cuts coma aberration and reduces lateral chromatic aberration, improving MTF to the utmost limit.

It is said that the performance of an optical system is entirely reflected in the beauty of its cross-sectional view (compositional drawing), and this lens, which can be called "the most beautiful medium telephoto lens in the world," proved to have such high performance that it is hard to believe that it is a 30-year-old lens.

I was also impressed by the fact that this shape is truly a crystallization of functional beauty created to achieve autofocusing.

At this point, the patent for the renewed HD PENTAX-D FA★85mmF1.4ED SDM AW has not been disclosed, so we do not know the details, but looking at the product's special website, it seems that a great deal of effort was made to surpass its predecessor. The performance seems to be high enough for high performance, but it seems to have grown to a rather respectable size, which is not surprising thanks to SIGMA's Art series.

This is a performance analysis and review article of the PENTAX FA 31mm F1.8 Limited You hardly unde ...