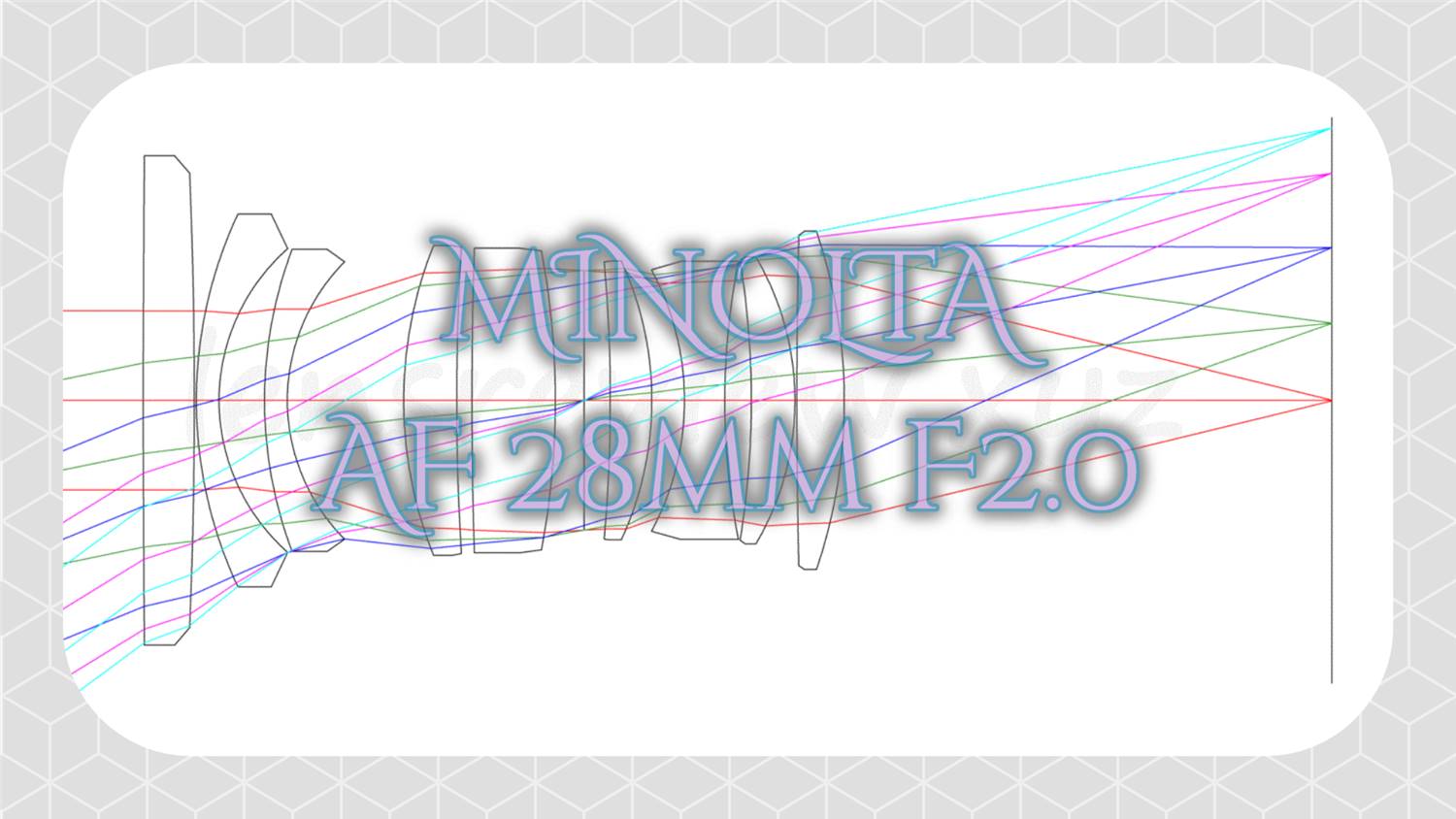 This is a performance analysis and review article of the MINOLTA AF 28mm F2.0

Confirming the year and the number of elements, it seems that there are two optical systems: the "first generation with 10 elements" and the "second generation with 9 elements," which have existed since the early days of the ROKKOR system development.

Later, the "optical system of the second generation lens" seems to have continued to be used in a series of AF lenses with autofocus.

This analysis article will focus on the second generation 9-element lens.

The 2nd generation lens would have been produced until MINOLTA withdrew from the camera business, so it is estimated that it was produced for more than 20 years. It seems that it was quite a long-lived lens.

Although it is said to be a masterpiece with its large aperture and high performance, it was not succeeded by SONY, which absorbed MINOLTA's camera business, and now (2020) there is no successor and used products are at a premium.

One of the few lens-related books we have at home is "CAPA Interchangeable Lenses 94" by Hideo Nishidaira. This book has been published annually as a series, and the 2009 edition was the last one, as many of you probably know.

It is very useful and I still own several copies. The 1994 edition is the oldest in my collection and I treat it as permanent.

The author of this book, photographer Mr. Nishidaira, is an amazing person, and the amount of information in this book is so overwhelming that I was surprised.

The content of the book is not just an opinion piece. The contents of the book are not mere impressions, but rather, they are based on measurements and evaluations of chart photography and actual shooting, with dry comments based on the results of the analysis.

In the film era, chart photography and measurements were taken only after the images were developed and printed, so it took time before the results could be viewed.

It is no exaggeration to say that Mr. Nishidaira is the "devil of lens evaluation" who has been publishing this many books for more than 10 years.

One of the lenses that Mr. Nishidaira wrote about as his "favorite" in the 1994 edition of his book is the MINOLTA AF 28mm F2.0, a lens that has been on my mind for many years. (Same optics from new MD).

Although I have been interested in this lens for many years, I have never used a MINOLTA SLR camera. A friend of mine from my younger days was a MINOLTA user, and I used to use a different manufacturer, perhaps out of rivalry with him.

In retrospect, I wish we had chosen the same manufacturer so we could have shared equipment.

Time has passed, and now it is 2020, Mr. Nishidaira has passed away according to rumors, and I will never see my friend again, but in memory of Mr. Nishidaira and his friend, I report the results of my research below.

Since Example 4 seems to be close to the product configuration diagram, I reproduce it below as a design value.

Above is the optical path diagram of the MINOLTA AF28 F2.0.

The lens consists of 9 elements in 9 groups, and no aspherical lens is used. It is a retrofocus type lens, which is typical of wide-angle lenses for SLR cameras with many concave lenses on the subject side.

The convex lens is placed on the subject side most often to compensate for distortion and field curvature, which was common in the days when it was difficult to use aspherical lenses.

Wide-angle lenses for SLR cameras have to have a long back focus with a short focal length in order to leave space for a mirror on the image sensor side, which makes it difficult to ensure performance.

For a clear example of a 50mm focal length lens with a 6-element construction, please see the NIKON 50mm F1.8D we have analyzed in the past.

Due to the large aperture of the lens at f/2.0, the shape of spherical aberration is a full collection with a bulge in the middle, but it has a peculiar habit of warping at the top end, and a unique sense of resolution and bokeh can be expected.

Axial chromatic aberration is basically smaller with wide-angle lenses, so there is no amount of this lens to be concerned about.

The curvature of the image plane is tilted to the minus side in accordance with the bulge of spherical aberration to compensate for the misfocusing at the periphery of the image. The difference between sagittal and tangential aberrations (astigmatism) is large at the extreme edges at the top of the graph, but in the film era, the corners of the screen were not often printed due to print size.

Therefore, it was not bad enough to be a concern. In the digital age, however, it is possible to enlarge the image to the four corners of the screen, which is a scary time.

Distortion is slightly large for a wide-angle lens, but seems to be about 2% at maximum. Inexpensive all-in-one zoom lenses have distortion of about 5%, so it can be said to be small, but it is within the range.

The wider the lens, the more difficult it is to correct for lateral chromatic aberration, which is also a severe characteristic due to the large aperture. When we look at the lateral aberration described in the next section, we can see that it is well dissipated by coma aberration.

Let's look at it as a transverse aberration.

Looking at the characteristics in the tangential direction, there is significant coma aberration in the g-line (blue) and c-line (red) in the middle part of the image, but it is assumed that the lens was designed with this in mind, as it diverges the chromatic aberration and makes it less noticeable.

However, this effect diminishes when the aperture is stopped down, so chromatic aberration will be noticeable at small apertures.

In the sagittal direction, as is expected with a large aperture of F2.0, a fairly large flare component remains.

Please note that the scale is larger than ±0.3 this time. The spot spread is large at the image height of 18mm or higher at the periphery of the screen, but the standard d-line (yellow) is reasonably small, and the scatter of the g-line (blue) and c-line (red) is large.

The greater the scatter, the weaker the image formation, so the chromatic aberration is not so noticeable when the image is taken.

This is an enlarged spot diagram with the scale shown changed.

This is prepared for comparison with modern lenses, but the scale is a bit harsh for lenses of this era.

Finally, let us check the results of the MTF simulation.

Although the MTF peaks are not high when the lens is wide open, the apexes are highly consistent, which explains why Dr. Nishidaira described the lens as having a high flatness.

The height of the mountains improves when the aperture is stopped down to f/4. Although the flatness of the image seems to be slightly degraded, it can be said to be sufficiently high performance. However, there is a concern that lateral chromatic aberration may be noticeable, so I think you should enjoy the well-balanced performance of a wide-aperture aperture.

We found that the performance of this lens is exquisitely balanced while being a little peculiar, as it is the lens that Mr. Nishidaira loved to use.

It seems to be at a high premium, and I don't know if I can get a used one in good condition, but it is a gem that I am looking forward to seeing in action.

I hope your friend is doing well…